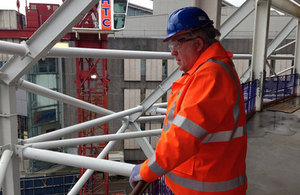 Transport Secretary Patrick McLoughlin visited Birmingham New Street today (April 22, 2014) to see progress on a $ 600 million project to convert into one of the country’s flagship train stations and help highlight more than 200 other infrastructure projects, which should start this year.

The Minister of Transport was given a tour of the renovation work, which includes a new hall, a huge atrium and better access.

The program is part of the largest national rail spending program since Victorian times with $ 38 billion.

Patrick McLoughlin was one of several cabinet ministers who highlighted the importance of energy, rail, broadband, road and flood protection across the country as part of the government’s long-term economic plan.

An important part of the government’s long-term economic plan is to invest in world-class infrastructure. That is why we are investing record sums of state subsidies in our railways over the next 5 years.

Projects like the ones I saw in Birmingham today (April 22, 2014) show how determined we are to make the transport network fit for the future and to get the country going again.

When New Street is being redeveloped, a new hall is being built that is three and a half times larger than it is now. For the first time, the station is supplied with daylight through a huge atrium and more than 30 new escalators and elevators provide better access.

There will be new connections through the city center, including a direct link to the Midland Metro extension opened in 2015, new entrances and a new station facade that will create a new landmark in the heart of Birmingham.

The project is part of over 5.5 billion maintenance and investment works on the North West Route of London that will have a lasting impact on the lives of passengers in the West Midlands and stimulate local and national economies.

The West Midlands program is part of a major rail network modernization supported by record investment and spending. This will create space for an additional 140,000 commuters in 10 of our largest cities by 2020.

This is just one element of a bold program of government investment to fuel economic growth. It is estimated that over 14 billion public and private investments will be made in transport infrastructure between 2014 and 2015.

Improvement of the transport network

Donbas braces for a ‘knife fight’

royal memorabilia has captivated the public for centuries

How the controversial nationality and borders bill may help people from...

the history of royal funerals and how this one will be...